Dec 8, 2017 - A Chicago woman who prosecutors said used Facebook Live to stream a beating of a mentally disabled teenager from the suburbs avoided prison by pleading guilty to a hate crime Friday in Cook County circuit court.

article by Bob Susnjara for The Daily Herald


Brittany Covington, 19, received four years' probation in exchange for the negotiated guilty plea. In addition to the hate crime, she admitted to aggravated battery with intent to disseminate on video and intimidation charges, according to the Cook County state's attorney's office.

Cook County Judge William Hooks sentenced Covington to 200 hours of community service as part of the probation, plus ordered her to attain a general equivalency diploma. Covington also is prohibited from contact with any gang members, must submit to random drug testing and is banned from all forms of social media for four years.

The four defendants in the case are black and the victim white.

Authorities said the then-18-year-old Crystal Lake victim met up with Jordan Hill -- formerly a student at Aurora's Core Academy and Hoffman Estates' Conant High School -- on the afternoon of Dec. 31, 2016, at a Schaumburg McDonald's restaurant. Later, the teen called his parents for permission to spend the night at a friend's home. 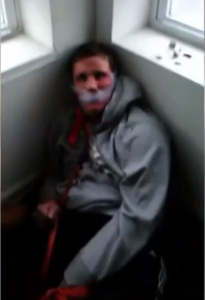 Cook County prosecutors said after the teen met with Hill at the McDonald's, they and another person bought and smoked marijuana. Hill stole a van in Streamwood and the trio met up with another individual and drove to Chicago, eventually going to a building on the 3300 block of West Lexington Street, where Covington and her sister lived in an apartment on the third floor, according to authorities.

By Jan. 2, the teen had stopped communicating with his family, and his parents filed a missing-person report with Streamwood police, prosecutors said.

Prosecutors said the livestream on Facebook showed all four defendants participating in the abuse. Authorities said the abuse included Hill and Cooper punching the teen in the head, forcing him to drink toilet water and gagging him with a sock and duct tape.

Still pending are the cases of Hill, Cooper and Covington's sister, Tanishia.
http://www.dailyherald.com/news/20171208/woman-gets-probation-in-beating-of-teen-shown-on-facebook-live

RELATED POST: Man with Special Needs ‘Tied Up & Tortured’ on Facebook Live in Chicago
Posted by Jim Watkins at 7:11 PM