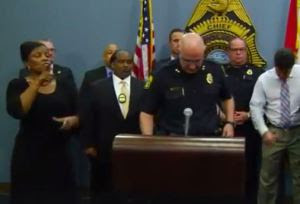 Dec. 4, 2017 — TAMPA, Fla. (AP) – Hearing impaired people tuning into a news conference about the arrest of a suspected serial killer in Seminole Heights got a message of gibberish as they watched an American Sign Language interpreter.
Tampa Police Department spokeswoman Janelle McGregor said officials are conducting a review because they didn’t request an interpreter for the Nov. 28 news conference.

The next day, a new interpreter was at the news conference.