Jimmy Kimmel Takes Center Stage In Battle To Save Obamacare 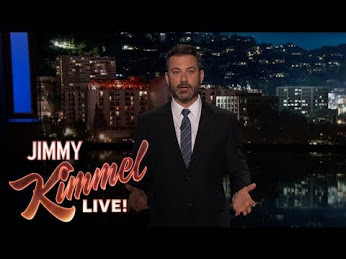 For two straight nights he has stood on stage at an ABC studio in Los Angeles and, using his own son's harrowing story as an example of the extraordinary costs of emergency treatment, argued that poor and middle class families would be priced out of health care under the new plan.

"I want you to know I am politicizing my son's health problems, because I have to," Kimmel said in a lengthy monologue Tuesday night in which he blasted a bill unveiled last week by Republican Senators Bill Cassidy and Lindsey Graham.

Kimmel's wife, Molly McNearney, gave birth in April to William Kimmel, who was born with a serious heart condition that required surgery three days after his birth.

His wealthy parents can easily afford the out-of-pocket costs, but in a tearful on-air appearance in May, the late-night host stressed that "no parent should ever have to decide if they can afford to save their child's life."

After the 49-year-old comedian publicized his son's plight, Cassidy came on "Jimmy Kimmel Live" to promise that the health care reforms he was proposing would "pass the Jimmy Kimmel test," meaning no family should be denied medical care because they cannot afford it.

Kimmel said this week he had felt Cassidy was being honest at the time, and sounded like a "rare, reasonable" Republican voice.

Then came the Graham-Cassidy bill, which converts the Affordable Care Act's complex system of subsidies to help Americans pay for insurance into block grants to the 50 US states.

Several patient advocacy groups have come out in opposition, warning it could lead to millions of people losing health coverage and plunging the health care system into chaos in many states.

Critics say the plan would dramatically slash funding of Medicaid, the federal health program for the poor and disabled; allow states to decide whether insurance companies can hike insurance rates for people with expensive medical conditions or impose lifetime caps on coverage; and no longer require insurers to cover essential health benefits like maternity care.

"This guy, Bill Cassidy, just lied right to my face," Kimmel said on his show.

On Wednesday Cassidy shot back: "I'm sorry he does not understand" the legislation, the senator told CNN, insisting his proposal fully protects people with pre-existing conditions and will lower premiums.

Kimmel pushed back. "There's a new Jimmy Kimmel test for you," he said. "It's called the lie detector test."

Kimmel himself has become a sort of celebrity leader of the opposition, using the tense back and forth with Cassidy, which played out on America's television screens and digital devices, to impact ongoing debate over whether Congress ought to move ahead with Graham-Cassidy legislation.

Vice President Mike Pence and several Republican lawmakers have been asked about whether recent versions of Obamacare repeal efforts would pass the Jimmy Kimmel test.

Graham, frustrated at Kimmel's criticism, said Wednesday he believed Kimmel might have been fed a liberal talking point and "bought it hook, line, and sinker."

Among the critics has been conservative-leaning network Fox News, whose morning host Brian Kilmeade chastised "Hollywood elites" for "pushing their politics on the rest of the country."

"My son had an open-heart surgery and has to have two more -- and because of that I learned there are kids with no insurance in the same situation," Kimmel responded.

"I don't get anything out of this, Brian you phoney little creep."

Republicans control 52 Senate seats, and can afford only two defectors. All 48 Democrats are united against the bill.

Republican leadership has signalled it wants a vote on Graham-Cassidy next week.
# # #