‘Back to the Future’ Shoes Cause Web Frenzy : Proceeds will benefit The Michael J. Fox Foundation for Parkinson's Research 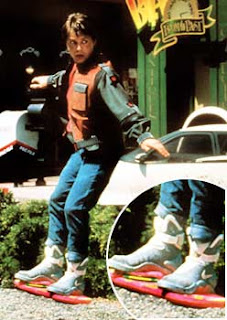 Remember those imaginary supercool, self-lacing shoes worn by Marty McFly in "Back to the Future II"? Well, the future is now: Nike has created its own version of the shoes and is auctioning off 1,500 pairs of the special-edition sneaker on eBay. Proceeds will benefit the Michael J. Fox Foundation.

Plus, the proceeds will be matched, effectively doubling the amount that will go toward Parkinson's research.

Michael J. Fox, who has the disease and who memorably played Marty McFly in the franchise, appeared on the "Late Show With David Letterman" to get the word out and to show off the cool Nike kicks.

The actor said, "This brings together three populations of people with major joneses. The sneakerheads, the 'Back to the Future' guys, who, believe me, are out of their minds — in a good way! Thank God for them. And also people in the Parkinson's community who have an interest in research." Not to mention people with a jones for Fox himself.

The Nike press release calls the Nike Mag an "exact match" to the shoes in the movie, "down to the contours of the upper, the glowing LED panel and the electroluminescent NIKE in the strap." These shoes don't appear to have laces, but aside from that detail, they come pretty close to the original pair. The press release notes, "The 2011 NIKE MAG illuminates with the pinch of the 'ear' of the high top, glowing for five hours per charge." As PC World put it, "at least they look cool."

The site will offer 150 pairs of shoes a day at nikemag.ebay.com through Sept. 18. Fans should know these shoes don't come cheap. The first pair sold for a whopping $37,500. TMZ reports that the winning bidder turns out to be Tinie Tempah, a 22-year-old British rapper.

How much for the flying board?