By the Chairman and CEO of Special Olympics International, Dr. Timothy Shriver And the President of the Organizing Committee for the Special Olympics World Summer Games ATHENS 2011, Mrs Joanna Despotopoulou. 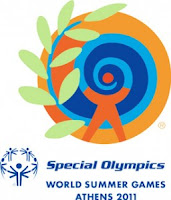 Violent protests, tear gas, and broken glass in Syntagma square top the international headlines but the people of Greece led another demonstration this week. 25000 Greeks have come together every day to join the Dignity Revolution, cheering for unity, working for unity, standing for unity. Sadly, the press has missed the story.

The future, however, will not.

The leaders of this revolution have no political affiliation. Leaders like Andres Delgado opened the Special Olympic World Summer Games in Panathiako stadium. He was there to claim his dignity despite the corrosive injustice he and 200 million people with intellectual disabilities confront everyday. He marched, his head held high, proud, triumphant. He marched with a message.

Days later, he proved his point: he won three gold medals, a silver medal, and a bronze medal in gymnastics. He broke all of his personal records for achievement. In doing so, he asserted the definition of Olympic greatness: beat your best. Compete only against yourself. Give your all to the contest and you have won.

The action on the playing fields of sport was matched by the action off of them. Even amidst economic anxiety and political upheaval, a special session of Greek Parliament was held to commemorate the Declaration of The Promotion of Sports Integration in Schools Act, a landmark law that promotes the full inclusion of youth with intellectual disabilities through sport. The law mandates a different model of education for Greece's youth in the future -- a model that focuses on learning the social and emotional lessons of unity.

Volunteers from throughout Greece have also demonstrated their unwavering commitment to these Games despite formidable obstacles. Amidst city-wide transportation strikes, over 300 volunteers found their own way from Athens to the Glyfada Golf Course to enable the golf tournament to continue uninterrupted. And together with nearly 25,000 others, the volunteers are providing our athletes with a world-class Olympic experience.

Greek medical professionals too joined the demonstration. They gave their time and resources to provide free health screenings to thousands of children and adults with intellectual disabilities. Through the Healthy Athletes program, thousands of eye glasses, mouth guards, hearing aids and health products have been distributed free of charge, and hundreds more athletes have been referred to doctors in their home countries for follow up care.

Leaders of international organizations have also joined this demonstration. Members of the United Nations, UNICEF, FIFA, Sport Accord, and the International Olympic Committee came to Greece together with ministers from around the world. They were here to express solidarity with their brothers and sisters with intellectual disabilities. The European Union provided unprecedented financial support as has the private sector. All these, far from attacking Greece, are investing in her. They will be significant actors in creating her future.

There can be little doubt that the political and economic struggles of Greece have created deep and painful wounds. Millions of Greeks are suffering. The crisis is far from over.